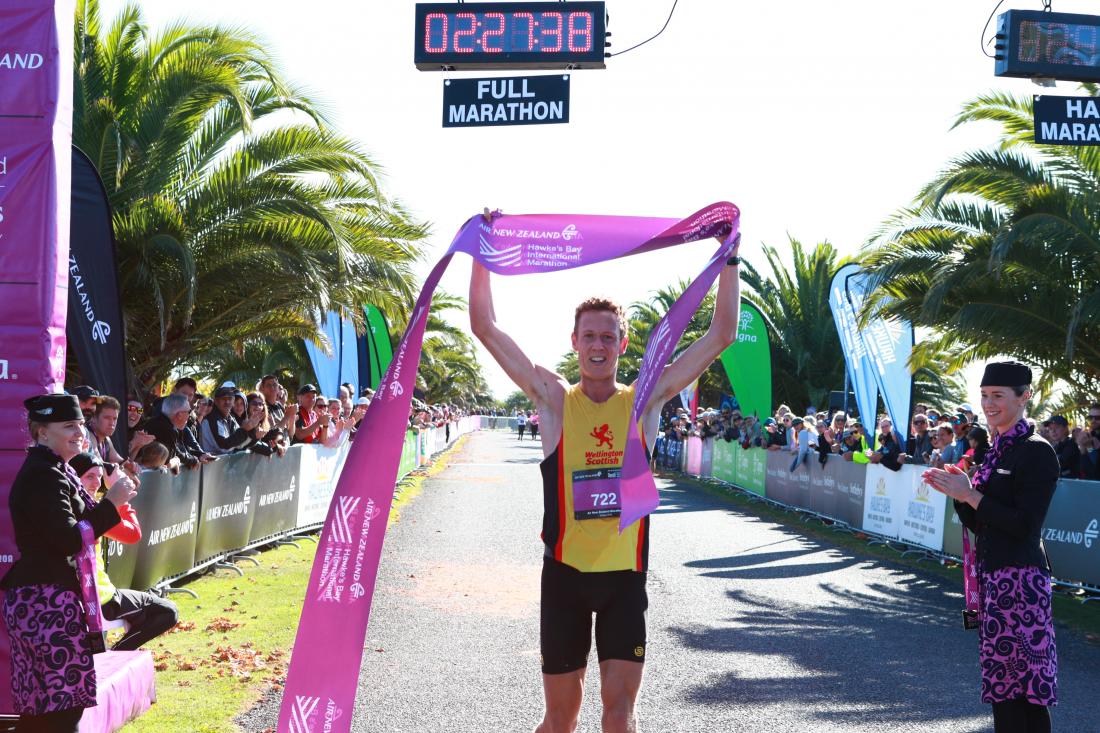 The Wellington athlete was made to work hard for his win though, with Nick Johnston (Fielding) leading through the halfway mark and refusing to be passed easily, with Jones only easing clear in the final 5km to win in 2:27:33, less than two minutes ahead of Johnston.

“I was running with Nick and another guy for the first 10 or 15k and then slowly started closing the gap, but it took longer than I expected, Nick held me off for quite a while and looked really fresh when I caught him,” said Jones.

“Once again Hawke’s Bay turned it on for everyone, it didn’t take long for the heat of the sun to come out and once you are running along on those stop banks, it was pristine today. The course is beautiful, you have a bit of everything, following the coastline, over some bridges and rivers – and really awesome support toward the end with all the people coming out.”

In the women’s race it was neck and neck to the halfway point with defending champion Sabina Piras (Auckland/USA) and Cecilia Flori (Hamilton/Italy) running side by side throughout most of the opening 20km.

Flori used her superior ultra-running strength though to pull clear with just over 10km to go, to take line honours in 2:51:06, with Piras coming in a further 3:44 behind in second, while Fiona Love was third in 3:00:02.

Flori arrived in New Zealand in 2016 and has quickly established a name for herself on the ultra-running circuit and now over the marathon distance, and just quietly might fancy herself in a quiz team, as she enjoyed the Air NZ Quiz questions posted over the final few kilometres of the event.

“I felt pretty good the whole way, it is a really nice course, so nice. I loved the fact you had all those questions on the course, it distracted from the pain – I knew all the running questions! I really love the off-road aspect of the course; it is really different as I am used to mountains.

“Conditions were good, it was a little cold in the morning, but otherwise good running conditions. This was a bit of a training run for me, I have a 160km race in June!”

Piras was gracious in defeat on a day that saw her run almost 20 minutes quicker than her win in 2018.

“Cecilia is a really strong runner, I ran against her about a month ago and she is such a monster, so strong. I really appreciate running against her and having that rivalry, especially as New Zealand is such a small country.

“The conditions were beautiful, it was a little cold this morning and the wind wasn’t too bad but that was so enjoyable, it is the second year I have run.”

The New Zealand Sotheby’s International Realty Half Marathon was the busiest of all event son the day, with over 3,000 lining up at the start line opposite Splash Palace in Hastings, making their way towards the Tuki Tuki River and then along the coastline to the finish.

Jack Moody was fleet of foot in the men’s race, the Aucklander winning in a fast time of 1:07:21 from off-road triathlete Olly Shaw (Rotorua) and Max Spencer (Masterton).

The women’s race was won by Sarah Gardner (Tauranga), in the process posting a career best time of 1:18:43, to win by 31 seconds from Giselle Slotboom (USA) and Debbie Donald (Featherston).

The Cigna 10k honours went to Ted Taylor (Wellington) in 36:32, from William Leong (Palmerston North) and William Twiss (Wanganui) while in the women’s it was Laura Smidt (Blenheim) first in 39:20 ahead of Caroline Meo (Napier) and Cate Pedersen (Napier).

The day dawned a chilly one degrees with a frost on the ground, but the promise of beautifully blue clear skies and little or no wind on a picture perfect Autumn Hawke’s Bay day, as a record six thousand participants set off in the Cigna 10km, New Zealand Sotheby’s International Realty Half Marathon and the Air New Zealand Marathon, all converging on the finish line at Elephant Hill Estate and Winery on the Te Awanga Coast.

Race Director Adam McDonald was delighted with the response to the new courses and finish line venue.

“This is essentially like delivering a year one event, with three new and unique courses giving everyone a different experience in a stunning part of the world, all converging on a world class finish venue at Elephant Hill Winery.

“The feedback at the finish line has been hugely supportive of those courses and the experience, capped off by a suitably brilliant day of weather here in Hawke’s Bay. It was a little chilly this morning, but quickly turned into a perfect running day.”