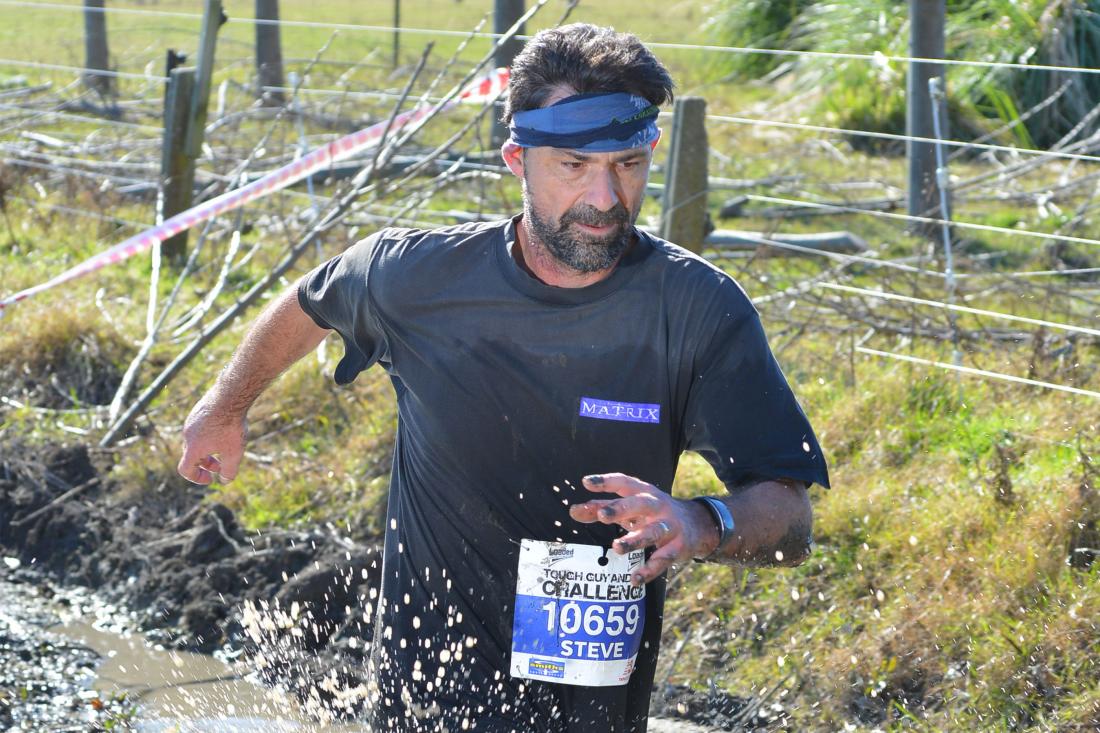 On the surface Steve Grant is an everyday Kiwi out doing normal things but dig a little deeper and it is quite incredible that this 50-year-old is about to take on his first ever marathon, inspired by the new finish line in his own back yard at Elephant Hill Winery.

Turn the clock back to middle of 2014 and the Hawke’s Bay father of two was closer to dying that he was to running the Air New Zealand Hawke’s Bay Marathon, with the fit trail-runner struck down by the life-threatening condition Sepsis.

“My Sepsis the result was a strep infection that somehow got lodged around my hip. I was just feeling like I had a bad cold over the weekend, and I said to my wife, if I am no better on Monday I am going to the doctor. We managed to get in late on the Monday night. He checked me over thoroughly and looked at everything and just when I was about to leave – I literally had my hand on the door handle about to leave the office, he said ‘let’s do a blood test’. So, we went and got that done just before closing.

“That night I didn’t feel too bad and the morning initially was okay, it was heading into school holidays, so my wife took our kids and their mates to the local pool and I was left to recover from what we thought was a flu. But halfway through the morning swim she got a call from the nurse saying best you get your husband into A & E.”

That began a frightening journey that put incredible stress on the family and on Steve’s health, but such has been his long road to recovery, that he will take on next month’s Air New Zealand Hawke’s Bay International Marathon, all the more inspired to do so given the event finishes in his local community of Te Awanga.

“I vowed and declared I would never do a road marathon as I am a trail runner by nature, but there are a few trails around that I thought would be great to run in the marathon and when the event shifted the finish line at Elephant Hill and I turned 50 this year, I thought I best do it!

“Just finishing would be nice, that is the hardest thing to a certain extent. You can do the hard work and get yourself physically capable, but to get that confidence back that I used to have and knowing I will get the end, that can be the dark dog in the background.”

Prior to his illness, Grant considered himself reasonably fit and healthy, but has not taken on an event of this distance since, so is understandably nervous about how the day will pan out.

“I was not anything you would call elite, but I reached a point where if someone asked how far I could run, I would say give me enough pairs of shoes and food, and I will just keep going. There is a part of me that still hasn’t got that ultimate endurance confidence back yet. That is why I want to do this.

“I haven’t done any major endurance stuff since I was crook, not of this level anyway. I have done a round of the Tough Guy Challenge every year, but that is only 12k and I have done the 10km event at the Hawke’s Bay Marathon before but nothing like this before.”

Even considering taking on a marathon is a far cry from the worst days during his illness and a testament to the work he has put in and the support of the community and medical professionals, with Steve’s best mate and his sister amongst those visiting almost every night during his hospital stay, his brother flew up from Wellington and his parent’s visited regularly, while the children were welcomed in by two different families to allow his wife a complete focus on Steve’s health. Someone even turned up at the family home and said he was there to mow the lawns while Steve was hospitalized.

“My wife is tremendous with her involvement in the local community and as a result they got behind us as a family and returned that support tenfold so she could just deal with looking after me and keeping the kids on track. At one stage one of the kids spoke in class when asked how things were going at home, they responded, Mum hasn’t had to cook a meal in 28 days!

“The hospital staff were absolutely amazing, I can’t thank them enough as there were a lot of dark days and some where I wasn’t terribly cooperative (drug induced) but their attention was 100% focused on their patient, and they absolutely actively looked after me 24/7.”

The medical team were initially unable to provide a prognosis as to Steve’s survival chances in those early days. Out cold for a couple of weeks and in hospital for over two months, Grant returned a shadow of the man that went in all those weeks earlier, with a dramatic weight loss combined with a complete loss of strength, ready to begin the long road to recovery.

“I cried when they came around and weighed me for the first time in hospital, I had lost 20kg in ten days.

“After being released from hospital, I had regular blood tests every month for six to nine months. The day I went off antibiotics after six months was a very scary day, but I got over that. It was a case of being diligent and working my way up from the short walks and sometimes not telling my wife how far I was going.

“My first walk was down to the local community hall, 500 metres away. About half an hour later my wife was wondering where I was. My past running history means I am always aware of my times and goal setting, it took me 22 minutes 36 seconds to get up to that hall. There is a local lady who lived nearby and always handed out butterscotches to the kids, she stopped her car and wound down the window and shouted, ‘looks like you could do with one of these!’”

Grant remains motivated to regain something close to his earlier fitness levels for his family.

“The biggest thing that I missed while in hospital was my kids. I was fragile anyway because of the drugs, but I remember breaking down multiple times because I wasn’t getting home to my kids, that was emotional when I came home. That is what has driven me since, I don’t want to be unwell again. If you can be fit and healthy you get to spend more time with your family. Basically, they said I only survived because I was quite fit to start with.”

Grant is all the more amazed at the resilience and strength of his wife, who not only had to manage the family through Steve’s illness and keep things together, but she had to cope with news that her gravely ill husband was also going to be out of work when he recovered.

“Round the time I was crook I completely missed the business I was working for going into liquidation and I was made redundant. So, I was forced with trying to find a new income during my recovery as well, fortunately we had good medical insurance which got us through financially initially.”

A natural gas network engineer by trade but only able to work for 5 to 10 hours a week during his recovery, Steve has since rebuilt a career working from home, with Grant Quality Solutions (GQS) helping small businesses with their compliance management from environmental to HR to quality and safety, balancing his time working with looking after the kids and home with his wife returning to fulltime work.

Running is very much Steve’s thing, with the family pursuing other hobbies, but he hopes they are there to share in his achievement at the Elephant Hill finish line.

“They will hopefully be at the finish line given it is so local. My son and daughter won’t be taking part as their fitness comes from other interests, basketball and tennis for him and dance and performance for her, but they have been wonderful in their support these past few years and I hope will be there on the day.”