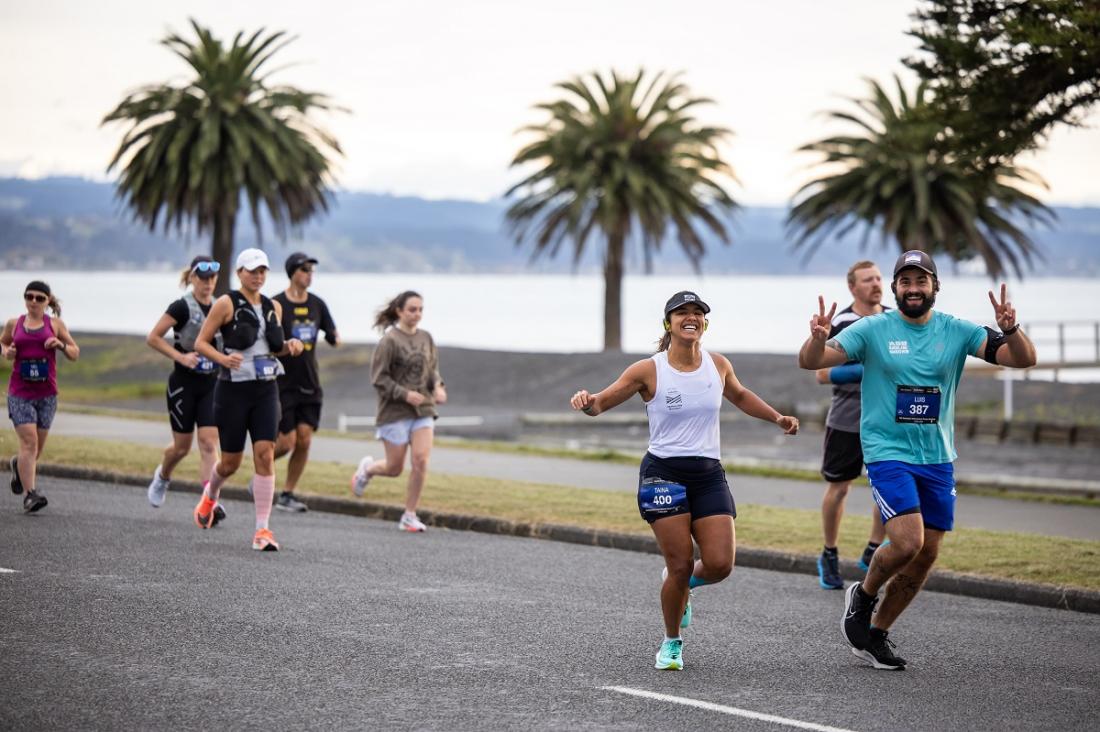 Today, Saturday 14 May, over 5,000 athletes made their way through scenic trails and idyllic country roads as they ran the New Zealand Sotheby’s International Realty Hawke’s Bay Marathon.

First across the finish line in the Sotheby’s Realty Marathon was 25-year-old Michael Voss, a two-time winner of the Rotorua Marathon who can now add Hawke’s Bay Marathon champion to his resume.

Rotorua’s Voss, competing in his first Hawke’s Bay Marathon, finished the 42.2km distance in a new course record time of 2:24:02.

“It's my first time running this event so I'm pretty stoked. The support out there was unreal, especially passing all the half marathon runners on the way back, everyone was just cheering and made it a whole lot easier,” said Voss.

“From about three or four km I just found myself by myself, so I just thought I’d get into my zone and just keep ticking off the km’s. I do most of my training by myself, so I’m used to it now,” he said. “It’s epic and a day like today when there’s no wind, not too hot, it’s ideal running conditions.”

Wellington duo Hiro Tanimoto and Sam McCutcheon were involved in a tight finish for podium places, with Tanimoto securing second in a time of 2:29:17 just 0.3 seconds ahead of the fast-finishing McCutcheon in third.

Another course record tumbled in the women’s marathon as Wellingtonian Ingrid Cree took control of the race late on to claim her first Hawke’s Bay Marathon title in a time of 2:49:34, less than a minute ahead of Canterbury’s Hannah Oldroyd.

“It was really hard, there were sections where you’re running solo for a wee bit, but I tried to get a few guys to run as a bit of a bunch. I thought Hannah was gone and I settled for second and then thought, go for it for the last section and I saw her, so I’m stoked,” said Cree.

This was Cree’s first time running the Hawke’s Bay Marathon, and she said she was delighted to find the course was flat and fast, in turn securing her a new personal best.

“That was a PB for me, I wanted to go under 2:50 and wasn’t too sure what the trails would be like but they're really hard-packed and quite quick, so I'm stoked. I felt really strong, there's always that mid-section where you think you've hit the wall but it's an awesome course, really beautiful even when you're pushing yourself,” she said.

Auckland’s Karen Donaldson-Barron finished third in a time of 2:54:29.

Winners were also celebrated in the La Roche Posay Half Marathon and Havana Coffee 10km.

Thousands Cherish Their Day in the Bay

Thousands of participants from all over New Zealand, as well as 60 international athletes, took part in the sixth edition of the Hawke’s Bay Marathon.

There was an emotional finish in the Havana Coffee 10km as Havelock North’s Di Snee completed the event alongside her team of support walkers, all wearing hi-vis pink vests.

Di usually runs the La Roche Posay Half Marathon but having been diagnosed with terminal cancer she was unable to complete the longer distance this year. Despite this, she and a group of close friends took to the trails of Hawke’s Bay one last time.

“There's so much support it's unbelievable, one of my girlfriends has come over from Australia and lots from New Zealand supporting me in this one, so it's very, very special,” said Di. “I've always done the half marathon and I knew this year I would not be able to do it so I said, 'come on, join me' and they all have, very willingly.”

Another participant who defied the odds to compete in the event was 26-year-old Jack Church from Auckland, who underwent heart transplant surgery just seven months ago.

“Probably not much rehab or training that went on for this, should've been more, but it's been a tough journey but I'm still here and just grateful to be able to move again. It was pretty rough to say the least,” said Jack. “It was cool to come down, it's an awesome event and it’s an achievement for anyone to run this so it was just cool to be running alongside everyone. Happy as. No limits, my mind is the only limit.”

With just less than two-third of participants entering the event from outside the region, Hawke’s Bay is set for a major economic boost to the tune of around $7.6 million.

The scenic course coupled with the popular food and wine finish line festival makes the event an attractive one for visitors.

Rotorua friends Chrissie Aratema, Sarah Doyle and Megan Sperry were back for their second 10km at the Hawke’s Bay Marathon. The three agreed that their favourite part of the event was the finish.

“We love the end, the food and wine,” Chrissie joked.

“It’s a great run though, it’s beautiful and we love the whole weekend down in Napier and Hastings, it’s awesome,” said Sarah. “We came down for three nights, we came down on Thursday. Last year we just came for two, so it’s been lovely to spend more time here. We’ll go home tomorrow after the farmer’s market.”

Today marked a special achievement for ten participants who became Runaway MVP’s for the first time– meaning they have now taken part in all three Runaway Series events: Hawke’s Bay Marathon, Queenstown Marathon, and Runaway Noosa Marathon. The triumphant ten were celebrated with Runaway MVP medals to add to their finisher bling.