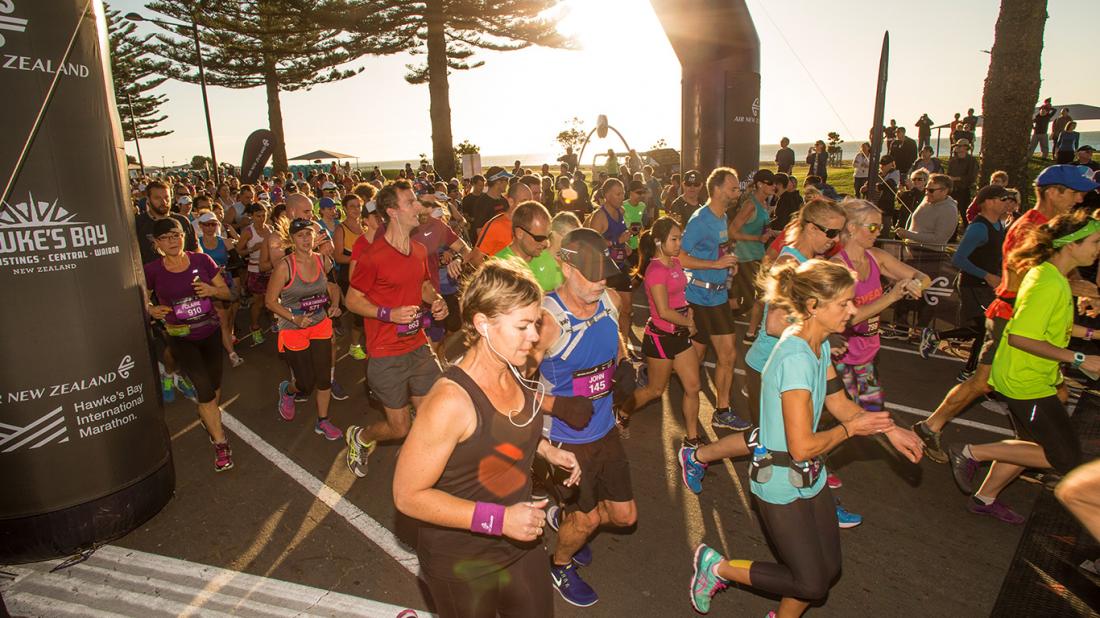 Hawke’s Bay will this weekend host a record 6,000 participants and thousands more supporters as the Air New Zealand Hawke’s Bay International Marathon takes place on Saturday, with athletes making their way along various courses from Marine Parade to the new finish line at Elephant Hill Estate and Winery in Te Awanga.

Contenders in the elite men’s marathon are numerous and include the intriguing prospect of former New Zealand triathlon representative Clark Ellice, with the 36-year-old racing in Hawke’s Bay for the first time, with the nature of the course and the destination catching his eye.

“I am working hard on my new career and spending time with my family, but preparation has gone great. If I can pace myself strategically in the first 20k, the plan is to sit with the leaders then the goal is to negative split from there to the finish,” said Ellice.

“I'd love to get in the low 2hr 30 mark but anything under my current 2hr 38 personal best will be a bonus. I am juggling my online coaching business, fulltime building apprenticeship and a family of two under three’s so I do have to be realistic here, prep for events is a lot more strategic these days given the time I have to train.

“I am looking forward to running the course though, I chose this event because of the hard-packed trail style, and it will be mint to be around faster company to get after that PB.”

Former runner-up Will O’Connor (Rotorua) famously uses the ‘run-walk’ technique and is looking to go one better than his 2017 performance but favouritism in the men’s race is likely to sit with Daniel Jones (Wellington), as the 28-year-old steps up after winning the New Zealand Sotheby’s International Realty half marathon last year, in record time (1:07:43).

Jones is coming off a win at the Air New Zealand Queenstown International Marathon in 2018, as well as a win at the Kepler Challenge and Mt Maunganui Mountain race on boxing day.

“This year my focus was the Lake Biwa marathon in Japan March 10, that went pretty well and ended up with a personal best of 2.18.40,” said Jones.

“With a year’s experience in the marathon I think I can have solid races in both and go back to back with Hawkes Bay and the Gold Coast which follows quickly after but my goal for this weekend is to really recapture that feeling of racing again and have a decent hit-out with anyone that wants it.”

The women’s Air New Zealand marathon sees a return for defending champion Sabina Piras (Auckland), the former San Diego native surprised many, including herself with her victory last year and will again be a strong contender in what looms otherwise as an even field.

Others aiming for a sub three-hour finish and likely to contend for the women’s podium include Elspeth McAuley (Katikati) and renowned ultra-runner Cecilia Flori (Hamilton), who will relish the chance to enjoy the hard packed off-road nature of the marathon course that takes runners from West Quay Street, along Marine Parade in Napier and then on a largely coastal course to the stunning Elephant Hill Winery finish line on the idyllic Te Awanga Coast.

While the front runners will have their eyes on the clock and the chance of victory, there are so many amazing stories throughout the 6,000 plus participants in all events on Saturday. Many are on their own journey with the finish line presenting its own challenges – in fact for some just being on the start line is a huge achievement and a chance to enjoy the day with friends and fellow runners, joggers and walkers.

The Air New Zealand Hawke’s Bay International Marathon is also supporting a new local charity partner in the Hawke’s Bay Foundation, a charitable trust that receives donations and bequests from individuals, families and businesses. These funds are pooled and invested for the long-term, with the interest being used to provide grants to local community organisations. Since 2014, the Foundation has pumped more than $950,000 back into the community.

The Foundation will have an expo stand at the finish area at Elephant Hill Estate and Winery, where they hope to engage with as many of the 6000-plus competitors and the thousands more supporters as possible.

Entries for the event are at an all-time high across the four race options including the Kids Run, Cigna 10km, New Zealand Sotheby’s International Realty Half Marathon and the Air New Zealand Marathon, bringing a significant economic benefit to the city with the 6,000 taking part and the thousands more supporters coming to town not just for the race, but to sample the delights of the wider Hawke’s Bay region.